Sisulizer is fully compatible with Unicode and can display correctly all East-Asian (Japanese, Chinese, etc.) and RTL (Right to Left, e.g. Arabic and Hebrew) languages, but for displaying those characters, Sisulizer use fonts installed in operating system. Font issue could occur on all Windows versions, even on Windows 7. Generally, Windows 7 has very good Unicode support, but unfortunately not all Unicode fonts contain all Unicode characters. This is not Mojibake issue described on this our site. Mojibake issue is related to general implementation of code pages on older Windows versions (all Windows versions before Vista and Windows 7), and even if your localized Japanese application displays Mojibake characters on your Windows with installed East-Asian language support, Japanese characters should be correctly displayed in Sisulizer. However, if on your Windows 7 (Windows XP behavior is described below) you’ll find small squares or thick and short vertical lines in Sisulizer sheet instead Japanese characters, it certainly indicate font Unicode issue.

You can fix this issue in very easy way – without advanced changes in OS, or installation new fonts – directly in Sisulizer. Select language column where issue occur (e.g. Japanese), next go to “Column” menu and select “Language properties” menu item. In opened dialog window go to “Font” tab, uncheck “Use the default font” checkbox and select other font in dropdown menu. 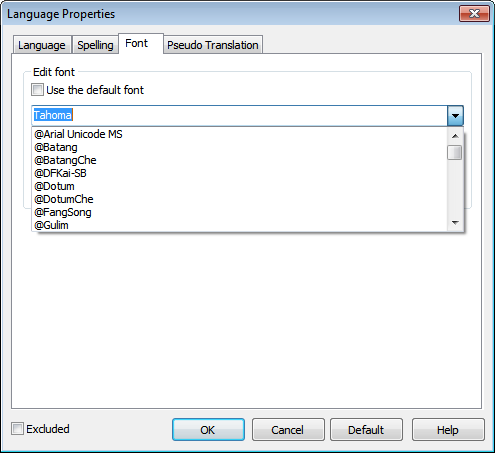 I don’t know specific settings of your system, but if standard Unicode font such as Tahoma doesn’t display correctly characters, try Arial. This font usually works. Below is screenshot from this same sample Sisulizer Project, but with changed font.

By default, with Windows XP is not installed support for East-Asian language, and for this reason all Japanese or Chinese character are incorrectly displayed, whatever you a font selected. For solving it you need install East Asian languages from your Windows XP installation CD. Go to Control Panel on your Windows XP and click “Regional and Language Options”. Next go to “Languages” tab and check “Install files for East Asian languages” and optionally “Install files for complex script and right-to-left languages (including Thai)” in “Supplemental language support” section. If you didn’t inserted Windows XP installation CD, Windows asks you about this. For applying changes, you need restart OS.

If this changes in your Windows XP, don’t solve font issue, try trick from part for Windows 7 (changing displaying Font in Sisulizer).

You can find out more about which cookies we are using or switch them off in settings.

This website uses cookies so that we can provide you with the best user experience possible. Cookie information is stored in your browser and performs functions such as recognising you when you return to our website and helping our team to understand which sections of the website you find most interesting and useful.

Strictly Necessary Cookie should be enabled at all times so that we can save your preferences for cookie settings.

If you disable this cookie, we will not be able to save your preferences. This means that every time you visit this website you will need to enable or disable cookies again.